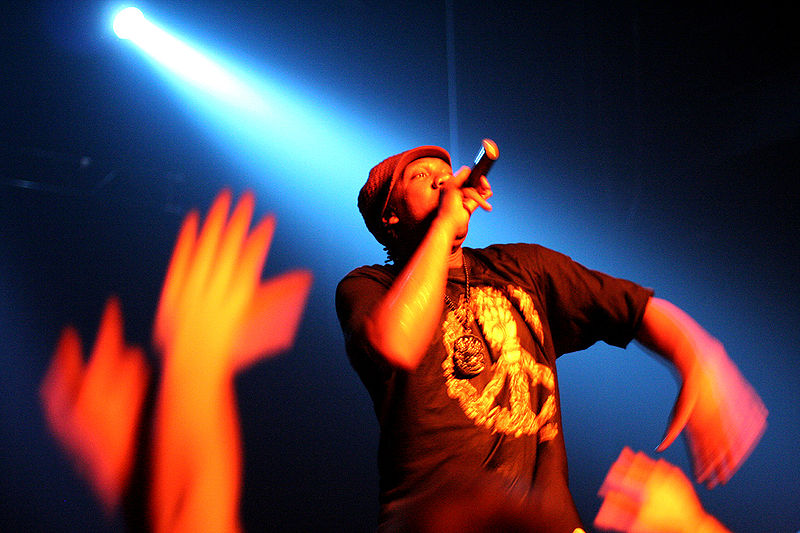 To listen to the Feel the Void podcast “Episode 5: KRS-ONE and the Literary Device of Repetition”, press play below or click here to check out all episodes.

KRS-ONE is a household name in the world of hip hop, a larger than life pioneer from hip-hop’s Golden Era dating back to the 1980s, and there are plenty of articles centered around his most influential and important songs, both as a solo artist and as the emcee for BDP, some of which include “MCs Act Like They Don’t Know” (1995), “My Philosophy” (1988), “Step Into a World” (1997) and, of course, the breakout track “The Bridge is Over” (1987).

This article focuses on another aspect of KRS ONE’s music and lyricism. As an educator myself, I think his lyrics should be studied in English courses in American schools. In his nearly 40-year career as “The Teacher”, KRS-ONE has released several tracks that utilize repetition, a writing strategy or literary device that students already learn about, but with KRS’ street and universal knowledge, his artistic contributions make repetition in writing and poetry all the more relevant and likely much more interesting and attractive to the youth of America. While I’m in no way saying dump the classics, I am suggesting teachers bring the work of a modern poet into the classroom and I guarantee it will allow students to see classic literature and centuries-old poetry in a new light.

I’m thinkin’ real hard about some money I can hold
But everybody I know is deep in the hole
A steady payin’ job is too hard for me to hold
I call around for work but they puttin’ me on hold
But in my hand a shiny .45 is what I hold
I make a mayonnaise sandwich out of some whole-
Wheat, I’m feelin’ weak, I can’t hold
I gotta rob somebody tonight and take the whole
Bank roll, some cash I gotta hold
At the bottom of my shoe is a little bitty hole
That’s it, my mental sanity I can’t hold
I’m walkin’ to the store with this pistol that I hold…

Above is the first verse from the track “Hold” which appeared on the eponymous album, KRS-ONE (1995), and for those who know the album well, more specifically the cassette tape, it was the last track on Side A. Obviously, repetition is found at the end of each line which alternates between “hold” and “hole”, and the poet emphasizes the similarity in the words as he raps. As the song goes on, the listener gets the sense that the character in the story is desperate and as KRS put it, “your addiction to your needs and your wants is what causes problems in your life. Make sure you got what you need. Put at a safe distance all the things that you want. It’s wants that get you into trouble.”

Among the most inspiring KRS-ONE songs from the viewpoint of this emcee is none other than, well, “The MC,” from his certified gold album, I Got Next (1997). In much the same way that legendary drum solos like John Bonham’s (Led Zeppelin) on “Moby Dick” have inspired scores of teenagers to take up drumming, if you heard “The MC” in the late 90s and it didn’t make you want to be an emcee, nothing would. At a time when commercialization of hip hop had grown to the point that it was the prevailing approach in the mainstream, the artist reminded listeners of the role of a real emcee:

When I was in college, KRS dropped The Mix Tape (2002) to hold people over until the release of the Kristyles album. The short album opens with “Ova Here,” the track he put out amidst his brief feud with the popular rapper Nelly, but on “The Message 2002,” KRS offers his usual positive encouragement to live a life of wisdom and righteousness.

Right from the hook, KRS begins with…

Then on to his first verse….

On “What Else Happened” from Kristyles (2003), KRS tells a story that’s both humorous, as well as a warning to impressionable females to watch out for players and to not play themselves.

One track later on Kristyles, KRS-ONE takes listeners on a journey through the opposite roles that people play in the world through the song “Somebody”. In a way it feels like a message to play the cards you’re dealt, even though it’s coming from a man whose main motivation appears to be to inspire others to improve their station in life.

On “Me Man” from Keep Right (2004), KRS raps like he’s having an honest and intimate conversation with a lost soul about his role and place in a changing industry. He follows his own path, and he’s still got something to teach.

Fast forward 16 years and the man born Lawrence Parker has not lost a step. Remarkably, on his 22nd album, Between Da Protests (2020), Kris hits us with the track “Black, Black, Black.”

The real Underground Railroad
The first subway for Black, Black, Black!
The freedom train begins with your brain
Get it on track, track, track!
Whether justice or injustice
How do you react-act-act?
Can you stand there laughing
While they shoot us in the back, back, back?
This is what some rappers sound like
Every time they rap, rap, rap!
I’m raising up the red and the green
And the black, black, black!
Even with no cops in the hood
We still hear “click-click, clack-clack-clack”!
I cannot forget my ancestors
Just because I rap, rap, rap!
Look at me from top to bottom,
KRS is Black, Black, Black!

KRS-ONE is the quintessential artist, poet and for me, inarguably the purest emcee. In the past, he’s been criticized for what some would label contradictory and controversial messages, but he’s been in the public light for nearly four decades, and what I get from his presence is honesty, growth, evolution and a positive spirit. He’s walked with the torch of hip hop the entire time, and spread an inclusive message throughout the world without shutting the door on anyone. That’s just one more reason to add to the list of a host of others as to why English classes throughout the nation should open the door to the poetry of KRS-ONE.