Founded in 2012, Surface Level Records began as a Pittsburgh-based hip-hop collective founded by fellow artists Proseed and Fortified PhonetX. The collaboration was a natural fit for the artists as they had routinely found themselves playing shows and building alongside each other as an integral part of Pittsburgh’s hip hop scene, with their sound rooted in sample-based production, live performance and the influence of hip hop’s golden age of the late 1980s and early 90s. Though independently released, several albums by the founding members and additional artists have been released bearing the Surface Level name for nearly a decade.

Today, Surface Level Records aims to offer a holistic experience through music, videos, podcasts, blogging and a public Discord server, all driven by a genuine desire to impact not only the musical landscape but the wider world. 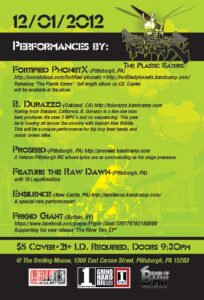