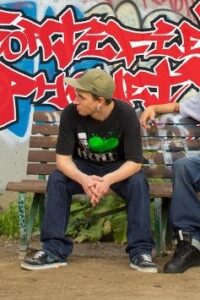 “Who’s that fella on the wheels of steel?” Said by anyone who ever catches DJ Blacklisted live on the set.

One third of the hip hop collective Fortified PhonetX, DJ Blacklisted is a Pittsburgh-based producer and DJ that city dwellers can count on for classic, underground and alternative hip hop when hanging out at their favorite bar or venue. A graphic artist by trade, Blacklisted is a creative light whose work has illuminated park benches and city buildings for more than a decade with printed fliers showcasing spectacular shapes adorned in the primary and secondary hues of the color spectrum. When he’s not lambasting the corruption and ineptness of city politicians, he’s returning a brown bottle to the counter and in the voice of Forrest Gump saying, “I gotta pee.”