To listen to the Feel the Void podcast “Episode 3: In Tribute to Gift of Gab, a Blazing Arrow”, press play below or click here to check out all episodes.

Yesterday, June 25, 2021, it was revealed that Timothy Jerome Parker, known worldwide as Gift of Gab, the emcee from the hip hop group Blackalicious, had passed away at the age of 50. Several years ago the man had suffered kidney failure, and reports say that he had to undergo dialysis multiple times a week. Amazingly, he still continued to write songs, record and do shows. The press release stated that there are more than 100 unreleased Blackalicious tracks that we may be blessed with in the future.

I’m actually not quite sure of when I first heard of Blackalicious, the duo comprised of Gift of Gab and Chief Xcel, the producer and DJ. I remember when “Make You Feel That Way” was released in 2002 and my older brother and I watched the video, refreshed by everything from the sounds, lyrics to the direction. It was a brief but important reminder that hip hop could be more than what it had become in mainstream culture, a conduit for commercialization and the cult of the self.

I recall my brother buying the album Blazing Arrow and listening to it in his car in the heat of summer. Highlights for me at the time were the collaborations with Zach de la Rocha (of Rage Against the Machine) on “Release, Pt 1”, as well as Rakaa Iriscience from Dilated Peoples, a group that I was damn near obsessed with in high school, on “Passion”.

Around that time, I read about Blackalicious when they were on the cover of the now defunct but extremely significant underground hip hop magazine, Elemental. The cover story talked about their earlier releases in the 1990s, and that’s when I scooped up Nia from probably UndergroundHipHop.com or SandboxAutomatic.com, the former of which, sadly, is no more, while the latter is impressively still around.

The fact that I went back is an often overlooked aspect of the importance of hip hop and the messages it sends and the lessons it lends. Hip hop taught me to look back and to appreciate that which came before. In high school, I was always listening to classics from the past. If it was the year 2000, I was probably listening to EPMD’s album from 1990, Business as Usual, or Gang Starr’s third album, Daily Operation, released in 1992.

Nia, released in Europe in 1999, then re-released by Quannum Projects in 2000, blew me away. As much as I was impressed by Blazing Arrow, Nia was and remains Blackalicious’ absolute masterpiece to my ears. From the opening track I was hooked. “Searching,” with its spacey guitar strings, soulful piano chords and airy woodwinds, has Gift of Gab accompanied by actress, singer and writer Erinn Anova, as they recite a poem that embodies the cycle of life and the beauty in the struggle that is universal. I recommend you read the lyrics and recite them with Gift and Erinn, just as I have:

For everything already there.

For every thought already known.

For everything that ever was, is and will be.

Struggling. Oh, how we struggle.

And the more we avoid it, the greater the struggle becomes,

until we realize, the struggle is the blessing.

From a seed to a tree.

No words can describe the unnameable.

Marveling at the miracle and all of a sudden it all seemed to make sense somehow.

Searching, for everything already there.

For every thought already known.

For everything that ever was, is and will be.

Gift of Gab would have been in his late 20s when those words were written and expressed. He was wise beyond his years, and the wisdom contained within “Searching”, though often overshadowed and overlooked due to the sheer volume of musical releases and countless other distractions vying for our time and attention, will remain cherished and appreciated for years to come by all walks of life, from hip hop purists to vinyl collectors who don’t usually go to hip hop first; to casual listeners and to anyone who just happens upon it. I think he would have faith in that idea, just like as evidenced by his music and poetry, he had faith in people. 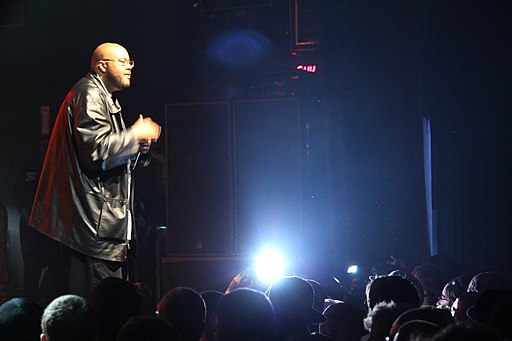 I’ve taken the death of the artist, musician and poet Timothy Jerome Parker pretty hard, and there’s no question that a lot of fans and fellow musicians are feeling the same way. I went through a similar period of mourning after the deaths of Guru and Eyedea, and more recently, DMX and Double K of People Under the Stairs. A part of that emotional experience with the loss of our musical influences is a result of our collective awareness of their monumental contribution to music and art itself. As Chief Xcel expressed about his longtime friend and musical comrade,

“He’s the most prolific person I’ve ever known. He was all about pushing the boundaries of his art form in the most authentic way possible. He truly believed in the healing power of music. He viewed himself as a vessel used by a higher power whose purpose was to give positive contributions to humanity through Rhyme.”

Reading that quote reminds me of the eponymous title track off of the duo’s third full-length album, The Craft, released in 2005.

This Craft, this beat, this rhyme, this vibe
This style, they say music gives new life
From a source inside that is forever flowin’
This stage, this mic, this crowd, this show
This life, I’ve been given a gift tonight
And for that, I vow to be a vessel

When I put my 7-year-old daughter into bed last night, just a handful of hours removed from learning about the loss of Gab, I played the song “Sleep,” a true original from Nia. Oddly, it’s the first time I played the track for her. I can remember listening to it through headphones as it spun around in my CD Walkman years ago when I was home from college. I’d lie awake, listening to the words, hoping that I’d be as good a poet and emcee as Gift of Gab one day, and maybe, if I had a child, this is how I’d put her to bed to sleep.

The shining lights of stages, after the show are faded
The crowd is gone away, and now the dawning day
Gives way to creatures lurking, can hear the crickets chirping
Only the owls can see for this is when they start their prey
The homeless ask for quarters, for shelter and some water
Say “sorry not today” and turn and walk away
The busy street is empty, whistling winds are blowing gently
Listening intently to all of the things they have to say
A day of work completed, a night of rest is needed
Almost done with a book but eyelids to heavy to read it
The fireplace is kindling, snug with your queen and building
About the victories tomorrow’s gonna bring your way…

Sleep, Mr. Parker. You found your purpose and it all made sense somehow. You were, and always will remain, a vessel.